Is undetectable – infinite variation and contextual adaptation. ** 8 DONT HAVE TO HIDE WHAT YOU ARE LEARNING = 10 , “glass ceiling”

A lot of times, when guys read lines or routines or seduction stuff (the pickup artist stuff). A big concern is that maybe this woman has heard this before. Some other guy was trying to do the Mystery Method with her. 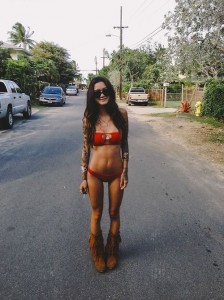 Which is true. That happens. Especially in big cities. I’ve seen this play out in bars and clubs.

If you’re worried about a woman picking up on the fact that you’re running some pickup artist routine that’s a problem. That creates friction within yourself.

And that’s becoming more and more of a problem all over the world.

Guys are running these kinds of routines and game. You don’t want a women to think that you’re doing that.

Even if she hasn’t seen that routine before, if you’re thinking Oh, she might notice this routine. You’re going to come across weird.

I don’t use these lines, and it even happens for me sometimes. I’ll approach a woman and give her a compliment and she’ll say: “Oh, that’s a nice line.”

But it’s not necessarily a bad thing. The girl that I’m seeing now, one the first things she said to me was: “Oh, is that your best line?”

She did like me and she was just kind of teasing me and playing a little bit. But it just illustrates the point that women are on guard for lines.

That’s what they’re trying to figure out. Are you spitting lines? Are you trying to run game?

Guys are trying to run game. Women know this, and are actively scanning your behaviour to screen it out.

I:PA*CE is basically undetectable. It is a structure, it is a system that you can go out and start consciously using.

Actually, it’s not even second nature, it’s first nature. I:PA*CE is your core nature. It is you at your best, being your true self.

What it becomes is like a troubleshooting tool after the fact.

You look back and say: “Oh man, she never texted me back”.

Or when I approached her she didn’t seem too responsive and you can use I:PA*CE to troubleshoot and say:

Personally, i’m aware I’ll end up talking about myself too much, so I’ll need to step back and think: I need more C in here, more curiosity in here.

It is a system that you will be consciously applying. It’s not something that the women will detect.

She won’t sense that you’re doing anything. It doesn’t look like anything. It’s 2 people who are friends having a fun easy conversation.

It doesn’t look like game. Because the one thing that she’s trying to find in you (deception) isn’t there.

There’s nothing to trigger her game alarm.

Anyone who sees you talking to a women, if they didn’t see you approach her they would assume you already knew each other.

I’ve had friends ask me on multiple occasions “How do you guys know each other?”

This is an interesting bonus actually. If she’s with another guy who’s interested in her.

If you approach and it’s very clear that didn’t know her before and you’re trying to pick her up. It makes it very easy for that guy to interrupt you and to step in and try to tool or distract you. Maybe he’ll try and ask you a bunch of questions so that you can’t talk to her properly.

All that stuff happened to me back in the day when I was trying to game girls.

Now that I use I:PA*CE, first of all, I’m so much more interesting and fun than any other guy in the room.

She’s already very motivated to talk to me instead of any guy that she came with or some other guy who’s trying to hit on her. Or even sometimes her boyfriend.

I never get into situations where I’m talking to a girl and she tells me she’s there with her boyfriend anymore. And unless he saw me approach her, he just thinks we’re friends, that we already knew each other.

This is just one of the many additional benefits of I:PA*CE. I haven’t created a conflict. This guy doesn’t want to beat me up.

In fact, I’ll just do I:PA*CE with him and he’ll like me. I’ve met women like this before. I just talked to him. And then at some point she’d walk to the bathroom and I’d catch her eye and she’d slip me her number while I’m at the bar, away from her bf.

So it just avoids all of that. It avoids the problem with going out and being a ‘pickup artist’.

Being a pickup artist is going to get you punched in the face. It’s going to get girls calling you out on running game and doing routines.

But also it’s not an either or choice any more. I:PA*CE puts you in the sex guy role.

That’s how women think of about men – they put them in roles.

With I:PA*CE, you can naturally figure out what roles are available to you.

I:PA*CE is what you’re doing moment to moment.

It’s what you’re thinking about. Or really, it’s where you’re focusing your attention.