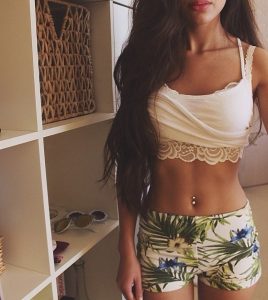 If I’m out and I want a girl to come meet up with me, or if I’m sitting at a bar and it’s happy hour, I’m having a burger and beer or something, I have a handful of girls I could call to join me. I’ll send them all a text. Something like, “I’m at this bar relaxing with a beer and a burger. It’s really nice. You should come meet me.” Most of them respond with something like “I don’t know, I’m just got off work and i’m on my way home now.” And so i ‘ll respond, “How can I make you come?”

I usually send this to more than one girl at a time. What usually happens is a couple of girls won’t be able to make it, and a couple of girls will perceive the sexuality in the message, and what girl doesn’t want to come? They’ll pick up on that, their thoughts will become sexual. Now, I’m not saying anything overtly sexual, so they don’t have to fight it, they don’t have to resist. We can both just keep pretending what I said is normal, basically.

It also puts the fire under her to show up. So there are the girls who say they can after they finish what they’re doing and then see what time it is. Then there’s usually one girl who says she’ll get changed and be there in fifteen minutes or half an hour.

When you can, the way to really optimize your success is to develop your own personal style because congruence with yourself is the X factor. It’s so important.

When you are just being yourself totally and doing the kind of things that you enjoy doing, whether it’s some kind of technique, or telling stories, or being really direct, or being really sweet and romantic, it’s all good. Whatever your style is, you’ve got to do that. It’s not about doing it right or wrong, it’s about being you. That’s the most important thing.

A lot of times it’s better to just not talk about it. There are so many guys who want to talk about sex, or use their window so she doesn’t resist. What’s really going on is that there’s an internal neediness within you, and she can feel it.

There’s this myth that talking about sex eliminates sexual tension. That’s a false causality. What’s really causing her resistance or ruining the sexual tension is your internal need for it, that she can sense it and that it just feels like pressure. It feels like emotional pressure. You’re trying to get her to do something.

I talk openly about sex with women. I don’t go into everything I do with women or get into graphic detail, but I’m open about my sexuality. I talk about it, and I’m interested in hers. Very interested in hers. I do this in a way that doesn’t pressure her. I don’t talk about it like I’m suggesting maybe she and I can do it. It’s more sharing what I like doing, and asking what she likes doing. It’s much more centered, and relaxed.

The less pressure she feels, the more likely she is to want to do it. When you put sexual thoughts into someone’s head, they get turned on.

We all know how we feel when someone tells you to do something. If someone wants you to do something at work, you instantly don’t want to do it. When a woman feels free to be sexual, she will, because women are extremely sexual.  This brings me to a very important point, that a lot of guys seem to be confused about.

Just as much, if not more, than men.

Coming from a lot of women I’ve talked to, there is just a general feeling of energy flowing through them, and after a while, if they don’t get fucked regularly enough, this tension will build up, and they’ll just start to get fidgety and angry, and they’ll get upset easily.

Their emotions get very tumultuous because they have this energy that hasn’t been released in a long time. That energy comes out as them acting really silly or fidgety or angry or emotional or being scatterbrained.

It’s kind of like us as men. If I don’t jerk off or have sex for several days, I feel a tension in my neck and chest, then in my shoulders, and I get mad really quickly, and I haven’t got any patience.

It’s very similar to women, only for them, the emotions are more varied. But that’s how women feel in terms of their horniness, day to day.