I think of compliance as short-term-shaping. You’re always getting compliance, but at some point you don’t really have to ask for it or try to get it – the woman tries to get it anyway. 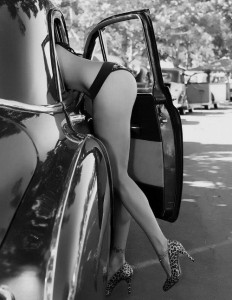 What do you want out of this relationship with this woman?

You want her giving as much as she’s getting, if not more. Trust me, I know. I’ve been in relationships where the woman was the princess and that was really tough.

After a while I started to feel resentment towards her. Even though the girl was really pretty, I actually got to a point where I didn’t want to have sex with her anymore because I didn’t like her. I didn’t like her as a person, and I was sick of her. You shoot yourself in the foot by putting a woman on a pedestal right off the bat. You’re setting the tone for a relationship that’s ultimately going to leave you unhappy.

So you have to set the correct tone immediately. You have to be honest in your actions. Only do something that you can sustain for the long term. Don’t act like somebody that you’re not going to want to be.

What do you want out of your relationships with people?

A lot of people get into interactions where they feel like they’re not in control. They feel like the other person is the authority. This is especially true in social situations when you’re talking to somebody and you perceive them to have higher status than you.

This could be a guy who has more money than you, is better dressed than you or is more attractive than you are. This could be a woman that’s really attractive on a level that you are not used to. So you put them on a pedestal. You assign them higher status. Remember it’s all in your head.

Instead of doing that, you should think about values. What do you really value?

I don’t value the cool game, where people are acting cooler than each other. I don’t value bragging. I don’t value showing off. I don’t value putting others down. I don’t value materialism. I don’t value superficial shows of beauty or status. I think all that is really silly. It’s basically a bunch of monkeys pretending not to be monkeys. When I see people doing this, I’m no longer intimidated – I’m just bored or flat-out not interested.

What I am interested in is genuine connections. People being honest with each other. People making each other feel better, being helpful to each other, having fun, being silly and enjoying life together.

When you assign someone value, it makes you feel less than them. It puts you down and puts them above you and it sets the tone for a relationship which is either not going to happen, or it’s going to be dysfunctional.

This completely alleviates all social anxiety.

Unless you value being witty, putting people down, or looking cooler to people, you will no longer be intimidated by people. If you value the ego game, then you’re bound to lose at times – and that’s going to create some anxiety.

But if you know what you value and you stick to that, you can’t lose. You can only connect or dismiss.

This is a very powerful frame of mind, and it turns the tables on all of your interactions. When you convey that you are not intimidated by the person, that you don’t see them on a pedestal, they will automatically assign you authority.