It’s important to get really clear about who you are and what you want out of sex. You need to express that, but couple it with the ability to let go. 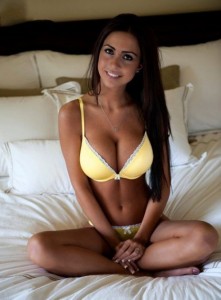 You do this in conversation in your initial interactions by stating what you’re about and being clear on the kind of man you are.

If a woman talked to you for five minutes, do you think you’d be able to imagine what she’d be like in bed?

That’s a really powerful thing to think about because a lot of times women just can’t picture being in bed with you.

I’ve met so many women who are attractive and fun and nice people – yet for some reason I just can’t picture myself fucking them. I won’t do it. There won’t be any drive to want to do that.

Most guys are already picturing sex with the woman. For women, it’s not quite the same.

With most guys, in the way they express themselves, you just can’t imagine him fucking the girl.

The girl can’t imagine being fucked by this guy because:

What you want is a woman picturing sex with you without feeling pressure to do so.

The way to do this is to talk about your sexuality, to be interested in her sexuality, and then to respond to that in an appreciative, curious way.

Talk about your preferences. Maybe you like to be really dominant, but you’re also very affectionate, very warm. You like to be in control, but you’re not aggressive or rough. You’re very sensual, very caring, but you love feeling that you’re in total control of a woman’s body and holding her as if she belonged to you.

I’ll say this to her and tell her this is just how I think about sex. With the tone of voice that it doesn’t mean we have to do it now, but rather, we’re just two adults having a conversation. As a result of this, she will start picturing these things in her head.

Perhaps she’ll respond that it sounds really nice. Sometimes she likes being aggressive herself. She likes it when a guy is aggressive with her. There are times for that.

With regards to your body language and proximity to her, you want to stand close enough so that you can feel the warmth of her body, but no closer.

You can get closer later on, but right off the bat, you want to feel her body heat and you want her to feel yours. That’s when you get into the zone – that little sI:PA*CE where you’re close enough to feel the heat of her body, which means she can feel yours. This creates an incredible charge between the two of you. It literally adds that spark and that heat to it..

When you talk and when you move your hands to express your ideas, you should be doing it fully – loud and dynamic enough so she cannot ignore you. You want her to feel as well as hear what you’re saying.

Just talk openly about who you are sexually, and be genuinely interested and curious about her as a person and her sexuality. When you do this, a woman gets extremely turned on and this motivates her to get to know you, to really want to see you again, to continue the interaction and the sexual tension.

In fact, I don’t think about attraction anymore. I think about creating a sexual vibe with a woman.

Typically, when people think about attraction, they think about value (how cool you are, how smart you are, etc), but unfortunately, that’s something that you can’t change in the two seconds it takes to walk up to the woman. You’re already where you are and that’s that. You’re either good enough or you’re not, and you can’t change it in that moment.

After the night is over, you can go back to the drawing board and fix some things in your life, but at the moment you see that woman, you’re probably only going to get one chance to talk to her, so you’ve got to go do it and just see. If she doesn’t think you’re good enough for whatever reason, that’s ok. That’s good even! at least you tried.

What I do think about when dealing with women is creating a charge, a spark, because that is where real attraction is. It’s sexual attraction.

That’s why you talk to a woman. Because she’s a woman, and you’re a man. If she were another man, it would be nothing more than a normal conversation, and you would probably never see each other again. I meet guys all the time in the bar and have nice and fun conversations, just as I would with any woman, but we don’t number-close each other or make plans to meet up.

It’s that sexual polarity that creates the spark.

The main thing I think about and what I want from a relationship with a woman is chemistry.

I only do things that I can sustain. I’m not interested in a long-term relationship right now, (although who knows what will happen if I meet the right person) but what I think about is chemistry.

I’ve dated too many beautiful women who I just didn’t click with, and it’s just not worth it.

I had a woman tell me one time after we had just finished making love (it was genuinely making love – it was really passionate) that our chemistry is amazing.

She helped me realize that actually was what made that sex so good. That we were on the same wavelength.  It’s something that is really hard to define. But you just feel a click with the person; you feel safe with them, like you can let go around them.

That’s really what I’m looking for. When it really is fun and free and loving, that’s when it’s really worth it. Otherwise it’s work.

If you’re not genuinely interested and you don’t really have fun with this girl, it’s going to feel like a lot of work. At that point, sex and time spent hanging out with her is not worth it to me unless there’s chemistry.

Here’s the clincher with chemistry: it cannot be forced. It can only be allowed.

You allow it by being honest. By knowing who you are and what you want, and then allowing the woman to be that as well. You’re guiding her to be real, to be honest, finding out what’s best in her, and having her direct it towards you.

I’m not necessarily talking about meeting the one and being married or anythin. I’m talking about having relationships with women where it doesn’t feel like work. It’s just pure fun. You want to see her. You choose to call her. You don’t feel obligated to call her because if you don’t she’ll break up with you. You want to call her – and if you don’t, she’s not going to flip out about it because she knows that you care about her and that you two have a connection.

Chemistry is when two people make each other better. She inspires you to be a better man, you inspire her to be a better woman, and you two grow together. That’s what chemistry is really all about. That’s the ultimate goal.