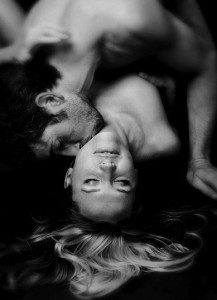 Surrender is what you want her to do. It’s what she wants to do.

Instead of spending time on learning lines, routines and tricks, become a man women want to surrender to.

True control must first be given. Why would she give you control?

Why do YOU give control? What makes you trust a coach, a politician, or someone else in a leadership position?

You can only lead another if they trust you with Control.

The steps are small at first. You say something to her, and she turns to talk to you.

Essentially you said, “I want to take control” and you non-verbally told her whether you BELIEVE she should give it to you or not.

This is what’s meant by the saying, “It’s not what you say but how you say it.” The way you carry yourself tells her if you are a leader or not.

This is why Deception-based “game” sounds great on a PUA forum, but doesn’t work in real life. Women are hardwired to detect deception in men. They are on high alert for it. There’s a lot at stake if she gives control to the wrong guy.

It takes less time, to become a leader, than it does to learn PUA routines. The results are permanent and require less and less effort over time.

Why should she surrender to you? Why would you give control to a coach, politician, or someone else in a leadership position. What emotions do you need to feel? These are the Gates of Control.

Is she in good hands with you?

Can you give her pleasure, or learn how?

Her desire is to let go of control, as yours is to take control. She doesn’t give you sex, she gives you control. This is what women mean when they say “I’m not ready to give it up.”

Seen this way, pressuring women into having sex is very low.

Letting go is scary. Surrender requires courage. Respect her for this.

What an honor to be trusted!

Trust requires respect. The shortest path to respect is honesty and integrity – inseparable in practice.

Fully opened, she is fully surrendered.

Fully surrendered she is in ecstasy, oblivion, filled beyond thought.

Fuck her brains out.