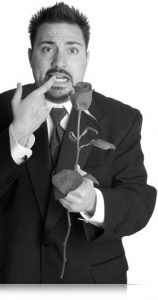 I’m nice. Most men who connect well with women are nice.

Where does the Jerk Myth come from?

Often, when they talk to men in a social situation, women act helpless, impulsive, silly, and even disrespectful or irresponsible. This is because most men allow it – women can act stupid, and still get sexual attention.

Some men call women out, ignore them, or tease them. These men tend to be gay, and women love them for it.

Gay men treat women as human beings because they don’t want anything from them. To a gay man, she is just a person, and he holds her to the same standards as any other person. (It’s interesting to see a gay man get all frazzled around a man he is attracted to. Depending on how effinate he is, he will act like a girl with a crush, or a guy in the “friendzone.”)

A man who is sexually interested in a woman, but can hold her to HUMAN standards, will end up teasing her and ignoring her a lot. He won’t be fooled by her pouting or caught up in her frivolous drama.  He will let her know when she is acting immaturely.

Men who naturally connect well with women see them as human beings first.

Hold women to adult human standards. To do anything else is demeaning and objectifying. Nice guys are actually disrespectful to women.

Imagine someone nodding and smiling and approving of everything you do. It would be creepy, and make you think they had a hidden agenda. Sound familiar?

If a woman annoys you, ignore her. If a woman acts stupid, tease her. If she is disrespectful, laugh at her and pull your attention away as you would to a guy acting the same.

It’s good to let women be silly, but don’t treat them like children. Hold them to adult standards. Women are used to being babied by men who want to fuck them. So when you do this, you may get called a jerk.

It’s no different than calling your buddy out for doing something immature, and he says “shut up asshole.” It’s the same thing.

A great piece of advice, though it may get misinterpreted: treat her like a guy friend. Don’t try to change your personality, or lower your standards just because you might “have a chance.”

Your integrity is more important than sleeping with one girl. This is how a leader thinks, and leadership is path to elite results with women.