The concept of a dating coach for men may seem strange to you. When people ask me what I do and I say “I’m a dating coach for men” I sometimes get strange reactions. Some men act like they can’t imagine struggling with women, and pretend to be incredulous, as if they have it all figured out.

But the reality is most men are bad with women, in the sense that they have little to no control over this part of their lives. They leave meeting women up to chance, think of having sex as getting “lucky,” and typically don’t have the confidence or skill to meet the women they really want.

But what would you rather have – a six pack, or a smoking hot girlfriend who loves to please you every chance she gets?

Which would you rather know how to do – kick ass at Call of Duty, or be able to approach your Perfect 10 walking past on the sidewalk, connect with fun flirty conversation, and get a solid phone number that leads to date?

How would you rather spend your Saturday night – watching other guys talk to girls all night while you drink liquid courage, only to go home alone, making a pit-stop at Taco Bell on the way…

The time and effort it takes to reach an elite level with women, with a coach to help and guide you, is actually much LESS than other, less important activities you might be engaging in. I think that’s what really holds guys back – they don’t even realize what’s possible!

Now the other reaction – usually from women – is fascination. Women understand immediately why there is a need for my services. When I tell women that I’m a dating coach for men, sparks their curiosity and leads to a fun, interesting conversation.

If you can pick up girls, great. A lot of guys can do that. In fact the the most impressive guy I’ve ever met is a supervisor at a collections phone center. He’s a regular guy, but could run circles around any self-proclained pickup artist. Being a pickup artist is NOT the highest level, but a lot of PUAs use the title, “dating coach for men.”

If you’re reading this, you probably don’t aspire to be a pickup artist, you want to be a better man, who can engage and arouse women naturally, while being your authentic self.

A dating coach for men is a teacher first. Being good with women is just a prerequisite. I’ve noticed that most “seduction gurus” teach a system for interacting with women, but they don’t have systems for how to teach. In other words, they teach a system, but don’t have a system of teaching.

Simply presenting a strategy for meeting and connecting with women is not enough. There’s a science to teaching, and that’s my passion – figuring out more effective ways to get a student the skill and understanding he needs to achieve his goals, AS FAST AS POSSIBLE.

The most common goal my students is to play the field, sow their wild oats, and find a woman they could finally settle down with.

But you don’t want to “settle.” And that’s why you hire a coach in any field. You want to make up for lost time, and cut your learning curve. What I can teach you would take the average guy 5-10 years to learn on his own. I’m going to shoot you 10 years into the future.

Like I said, I think my job is not weird at all – it’s actually very important, because most men have very little control over their dating lives. This creates a lot of sexual frustration, which has bigger implications.

As men, we need to express our innate human sexuality. We need to release our sexual energy. Without healthy channels for this, ie real women that we are passionate about, this energy can get expressed in distorted, negative ways…or simply repressed.

Most men don’t understand women. If they did, how to go to bed with them wouldn’t be so difficult and confusing. It’s this basic lack of know-how and understanding that makes men resort to game and manipulative seduction methods. Ironically, this approach is the most difficult, and least efficient way to connect and have sex with women.

From the woman’s perspective, it’s the MAN playing games, to get sex FROM her. This is a huge turn-off, but sometimes women will go along with it for a little while, because 1) every guy does this, so he’s not that bad relatively speaking, 2) hopefully he will stop the act and be real.

But it doesn’t happen, and women (usually in high school or college, start playing games too. Now we have two people playing games that are completely unnecessary.

As a dating coach for men, my vision is men and women connecting authentically, passionately, and if the relationship becomes long-term, it is built on love, support, and trust. If this couple decides to start a family, think of what a great home that child will be born into. 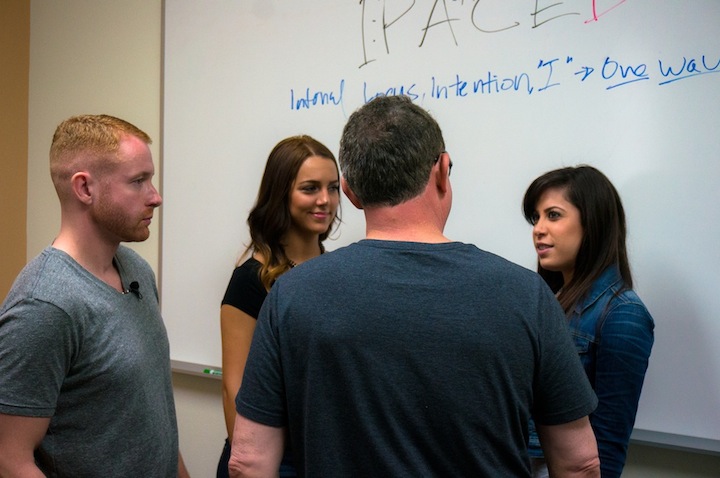 Over 50% of marriages end in divorce. And you know who suffers the most? The kids. My parents divorced when I was in my early teens, and it was very tough for me and my sister. But my parents had trouble getting along for as long as I could remember. The fights were awful. I think they really just weren’t a good match to begin with, and that led to years of fighting and tension, culminating in a broken home.

I believe men and women CAN be friends. In any relationship that stands the test of time, the two people are FRIENDS. You may associate friend with “friendzone” or “friends with benefits.” But those are misnomers. The friendzone really means the nothing zone. She is not interested in you sexually, and she wouldn’t miss you if you disappeared off the face of the Earth.

The women in my life are my friends. We are sexually intimate, but this doesn’t complicate things. It’s actually very easy to sleep with women, share a genuine friendship, and only commit if and when you want to. You just have to understand women (Awareness – the ‘A’ in my ACT Leadership System, and the sexual process (Control – the ‘C’ in ACT).

For a very small minority of men, this makes perfect sense. These are the guys that sleep with women quickly and easily. Usually it’s the WOMAN who initiates with this kind of guy, because she can tell that he is one of those rare guys, 1% of the male population, that “gets it.” He understands women, and is comfortable and confident about his sexuality. Plus he has a high degree of social intelligence, and can lead the interaction in a sexual direction. He can escalate without violating the social matrix which requires women to hide their true, sexual nature…because he SPEAKS the Primal Sexual Code that ALL WOMEN understand, but only 1% of men understand.

Have you ever had someone try to talk to you about a subject, but could tell they didn’t know what they were talking about, and were just trying to impress you? This how women feel when talking to a man who wants to sleep with her, but doesn’t know the Code.

A woman knows her own sexual nature, but very few men do. And society requires she hide it, or lose her value as a woman. But when a woman meets a 1% man, what I call a Tier 1 Man, it’s just like in the movies when two spies meet, and use a code word to identify themselves. She instantly recognizes you. “Ohhh he’s THAT guy. This could be a good night after all…”

And being “that guy” means being a sexual friend to women. When you can create that dynamic with women, you can build a roster of casual lovers, or select the woman you want, because you are unlike any other guy she’s ever met. She can be free, be herself, be wild and naughty with you. It’s not a question of her wanting you, but rather, you wanting to sleep with only one woman, or five.

Being a dating coach for men is not about helping guys get laid, or getting you some dates. To me, it’s much bigger than that.

I want humanity to evolve out of the dysfunctional paradigm of courtship, which hurts men AND women, and move into a new era of friendship. The transition requires leadership, and that’s what I will teach you.

If you’re considering coaching, you can learn more here.