Conversation and touch are the two most important factors when maneuvering into a sexual realm when talking to a woman. 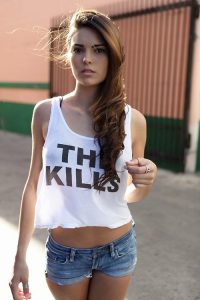 It’s easy to remember because, especially for guys from the United States who had gym class. If you remember, it was called Physical Education, and that’s pretty much what you’re doing with a woman when you’re talking about sex; you’re having physical education.

On the one hand, you can say PE stands for physical experience. You want to talk about what you like to do, and what you like to have done. When you’re talking to a woman, you want to get physical education from her. You are guiding her, telling her to educate you on her body.

You are getting her to educate you about her body:

Women have different kinds of underwear for different occasions. Sometimes I’ll look at the skirt she’s wearing, or jeans, and run my hand on her hip to feel her panties. This is, of course, in the middle of a conversation where we’re both feeling comfortable with each other. I’ll put my hand on her hip, and I’ll feel until she asks “What are you doing?” I’ll say, “I was looking for boy shorts. I really like boy shorts and I was picturing you in boy shorts. I want to know if you are wearing them.”

I’m talking about what I like, and I’m just asking her if she likes that or if she wears that.

Now, the tone or the energy you have here is very important. I’m not saying, “Are you wearing boy shorts? Because if you are, maybe we can get in a hotel or something like that.” It’s simply, “I like it, and I was just curious to see if you like it, or if you have those on.”

Another thing that you could talk about is what kind of sexual relationships she likes. I asked one girl what turns her on, and she told me “Intimacy. I really like just the feeling of intimacy, feeling really close to the person, feeling a connection with the person, like we are really sharing ourselves with each other.”

I had another girl who told me, “I like games.” And I was like, “What? What does that mean?” because that sounded bad to me.

She said, “I like to pretend like I’m a schoolgirl, or that you’re my dad and I’m in trouble, things like that,” and that’s what turns her on.

You can ask these kinds of questions, although, I wouldn’t ask her right off the bat. I have done that when I felt confident about it, and I felt like it would make sense, but it was too soon before.

It’s also good to talk about what parts of her are more sensitive. You can actually explore her body a little bit while you’re talking.

A woman’s whole body is sensitive and she has all kinds of little places. I remember this one girl, when I sucked on the inner part of her wrist, it would drive her crazy and she got super turned on. Another girl would wig out and just couldn’t take it when I kissed her between her shoulder blades. She was just really turned on.

Personally, I like to get kissed on my neck. I like it when a woman rubs on my chest, my back, and my stomach. It really relaxes me.

What really turns me on is direct contact. If a girl grabs my dick, I’ll get very excited. I don’t think I’m alone there.

But women are different–their skin is thinner, and has more nerve endings. They feel sex throughout their entire body. You can explore non-intimate parts of a woman’s body right there during the conversation. And get her really turned on!

The main point is that you are interested in becoming the master of her body.

If this girl is a part of your life, if you’re interested in seeing her more than once, you should become a master of her body.

First of all this will make her devoted to you, because no other guy does this. No other guy in the past has been this focused on her and on pleasuring her. She knows that it’s going to be a long time before she finds another guy like this. And even then, it takes time to do such a thing.

The best way to become good in giving a woman pleasure is to approach each woman as an individual, and explore them wholeheartedly. Be extremely curious about them, constantly, just trying to find your way of touching them and really taking note of things that they respond to.

Have a total focus on her body and what makes her feel good, and on treating her like a total individual. Don’t try to pull moves out of your bag of tricks that you’ve done with other girls. That’s not as effective as actually approaching her with an empty mind, with no expectations, like a student at his first day of class. That’s really powerful and it also says a lot about you. It’s such a loving, caring thing to do.

We have a unique opportunity to really make each other feel good. What most guys do is they approach sex more like a notch on their belt. They want to fuck her and brag about it to their friends – or add a stroke to their tally on the mental chalk board.

There is no love in it. There’s no passion or love or genuine appreciation that a woman can sense from her man. If she senses that you really care about making her feel good, and you’re interested in her body as a unique individual being, that’s endearing and attractive – and she will return the favor tenfold. I guarantee that.

It all starts in conversation. When you are first talking to a woman, you start asking where she’s from. Ask how long she’s been here. Ask her what she thinks of it.

She tells you what she thinks and you ask if she has any time for fun. Sounds like her work takes a lot of her time.  She tells you that she likes to mess around on the computer or watch movies, or go out. Everything she’s told you so far is more mental hobbies. Sitting on the computer? You don’t really need your body for that – you’re just sitting.

Here’s where you can ask her what kind of stuff she does that’s physical.

You can tell her that’s cool, you like her hobbies. But actually, the first thing you noticed about her is how curvy she is.

You saw her dancing and the way she moved her body. Imply sexuality.

She might tell you that she works out and dances. You can even say that, as a guy, you don’t ever get the urge to dance. You don’t ever go out and think you have to dance tonight to let off steam. But ask her why she dances. Maybe she says she likes to dance because after a long week, it feels good.

Then you can ask if she’s really in touch with her body – is she very sensitive? Does she notice changes in her body?

Then start talking about her body, what her physical experiences are like.

Tell her about your body, that some parts are really sensitive, but other parts are just kind of functional. You have pretty tough skin, but you do really like it when a girl really scratches your chest or runs her fingernails over my back. Whatever really relaxes you and turns you on. Tell her that.

She says she likes to be kissed on her neck, or gives other specifics.  And now you know certain places that are really sensitive.

It’s usually the soft, hidden spots on the woman’s body — the wrist, the back of the knee, the inner thigh, the clavicle – any place that’s vulnerable.

Ask her, has she ever been kissed behind her knees?

I have a thing for ankles. So I’ll ask a girl if she’s ever had a guy nibble her ankles, and she’ll say no. I’ll tell her that I love doing that. That’s the first thing I go for. I might say that I know it’s kind of weird, but I just want to see a girl’s ankle – I just want to grab them and kiss them and bite them. I think they’re so pretty.

And then I won’t say anything else. I’ll just let her take the conversation from there.

I’m not actually saying that I’d like to do it to her, that I want to bite her ankles. That would be pressure on her to actually agree to it. I don’t want to put pressure on her. I want her to make herself available out of her own free will.